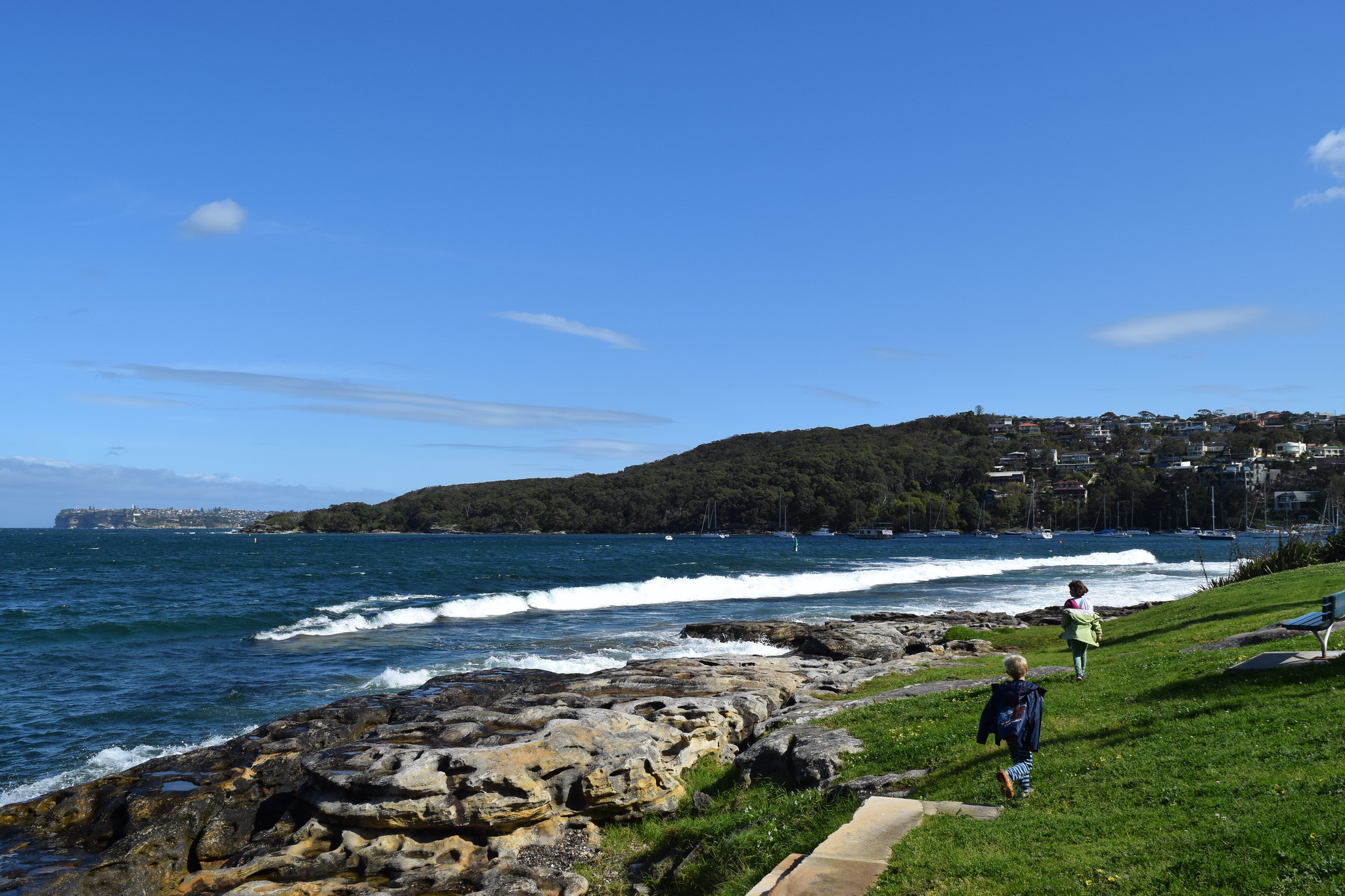 Friday was our last free day in Sydney, since we would be at the wedding Saturday and leave town Sunday. So we were determine to pack in a lot. My mom stayed home that morning because her brother was to come by, and besides, she was fighting a cold and needed to rest up for the wedding.

First, we went out to breakfast for the first time on our vacation, to Celcius Coffee Co., a tiny cafe at Kirribilli Wharf, which my cousin who lived in the neighborhood had recommended. 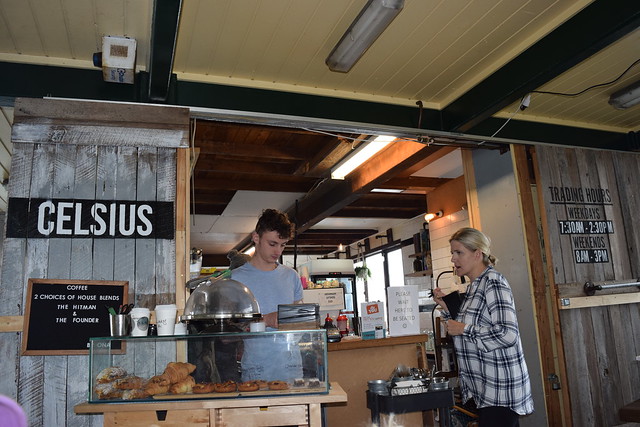 We were surprised by how hip and fancy the restaurant was. You can see on Instagram how they complement the beautiful waterfront location and yet fit in with the workaday dock with reclaimed wood and tons of windows.

The staff didn’t have much of a kitchen to work with, behind the counter in a small room perched on the pier, but they didn’t let that hold them back. First we sipped amazing lattes (my coffee variety was called The Hitman) and hot chocolates, complete with beautiful designs etched in the foam. Every restaurant breakfast in Australia seems to consist of a thick piece of toast piled high with fancy ingredients, and this one was no exception. I had the Super Greens Breakfast, with kale, asparagus and avocado puree plus eggs on my toast. The kids had french toast with a rich peanut butter dip, and while they loved the french toast, they didn’t care for the dip. Naturally, the breakfast cost us at least $100 for four of us.

Then we hopped on a ferry right at that pier, headed for Circular Quay. Unfortunately, Erik left his backpack sitting on the wharf. He told the ferry staff, who said they’d let him ride back on the return trip, after which the ferry was going to come right back to Circular Quay anyway. When he got there, he told us later, the backpack was still sitting in the same spot. We kind of loved how no one worried at all that the backpack would be stolen. And no one dreamed of calling the police in case the abandoned backpack contained a bomb.

I was pretty consternated about Erik forgetting his bag, because I didn’t want to miss the 10 a.m. Aboriginal Heritage Tour we were signed up for at the Royal Botanic Gardens. I’d read it was really good, and I had prepaid $39 per person, including the kids. The kids and I walked to the gardens and found the meeting spot, near the gift shop we’d visited on our first day, and waited around for the tour to gather. A few other people waited outside, but some were looking for the ordinary free tour, and until our aboriginal guide showed up, I was worried that we might be waiting in the wrong place or at the wrong time. Just after Kalkani our guide, arrived, Erik ran up, huffing and puffing, with his bag.
Kalkani (rhymes with “balcony,” she told us) was an affable, brown-skinned, petite young woman. She told us her name meant eagle. Later I found out it is also the name of a volcano. Her people were from Northern Queensland, unlike the Gadigal people who had lived here on Sydney Harbour, but she had learned their stories, and some customs and beliefs were common to both her people and the Gadigal. She showed us one tree known as the “corner store,” because the Gadigal people got so many things from it. Another was a child-minder tree. She showed us reedlike grass that kids could use to make a whistle and call their parents if they got lost. And she showed us a leaf that people could use like soap. 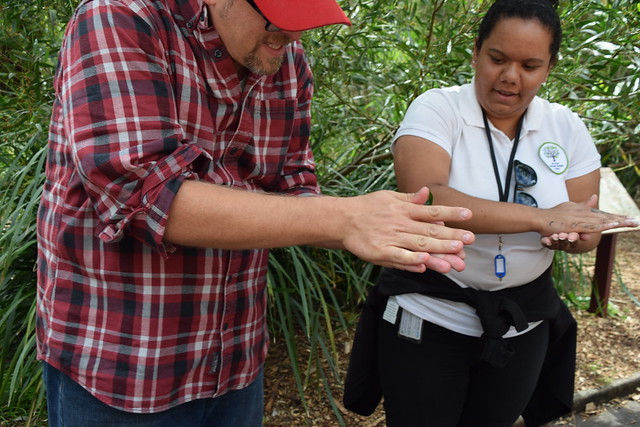 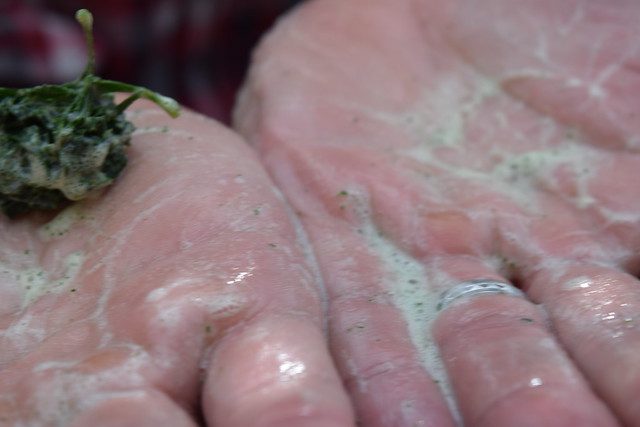 She made a little ochre paint by pouring water from a plastic bottle into the hollow of a rock, and showed us how to write a symbol on our hands: “travel,” represented by the simplified image of an emu claw.

At the end of the tour, we came to a table where she showed us products the Gadigal made from plants that grew here, including this baby carrier, which started out as a piece of bark and was soaked and curved until it could cradle a baby. 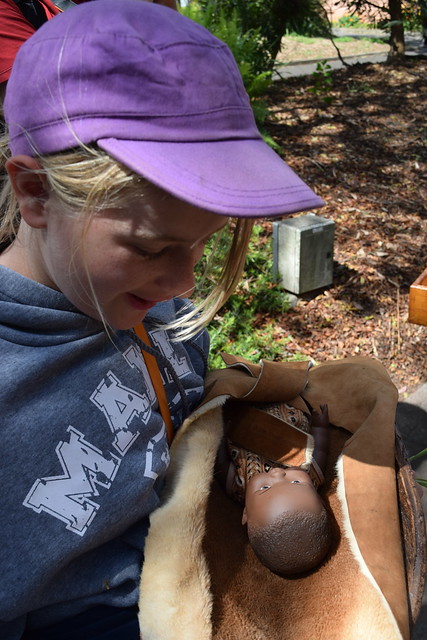 //embedr.flickr.com/assets/client-code.js
Kalkani had not heard much about Native Americans. She was surprised when we told her that some native strapped their babies to flat boards to carry them, instead of curved ones.

She also showed us a club and told us that Bondi (pronounced bon-dye) Beach is named after the club, not because they found clubs there, but because the crashing waves reminded the Gadigal of club strikes.

The Aboriginal Heritage tour was well worth the money, and I highly recommend it.

After our tour, we still had half a day ahead of us. We decided, somewhat impulsively, to take the Manly ferry again and try that Manly to Spit walk again. This time, the ferry ride went smoothly, and we stopped at Aldi in the ferry terminal to load up on snacks and drinks. Then we set out walking, first along the waterfront, searching among the rocks for fairy penguins, an animal Pebbles had written about in school and dearly wanted to spot.

The weather was windy and the waves crashed on the rocks that we were searching.

“Maybe the penguins are staying warm in their holes,” Pebbles had to concede after awhile.

The path gave us some spectacular coastal views for awhile, then left the waterfront and took us through suburban neighborhoods. We passed a bus stop. Finally, after what already felt like a very long hike, we came to a park with public bathrooms and a beach. Here, the path seemed to just end at a forest with a fence, a beach and marina full of small anchored boats to our left and the backyards of fancy houses with huge picture windows rising steeply to our right. Behind the boats we could see the buildings of a city neighborhood — a far-flung area of Sydney, I guess. After chatting with another pair of walkers also trying to figure out where the walk went, we came to the understanding that during low tide, you could walk between the edge of the woods and the water. They decided to try walking through people’s backyards. But we were already running out of time. 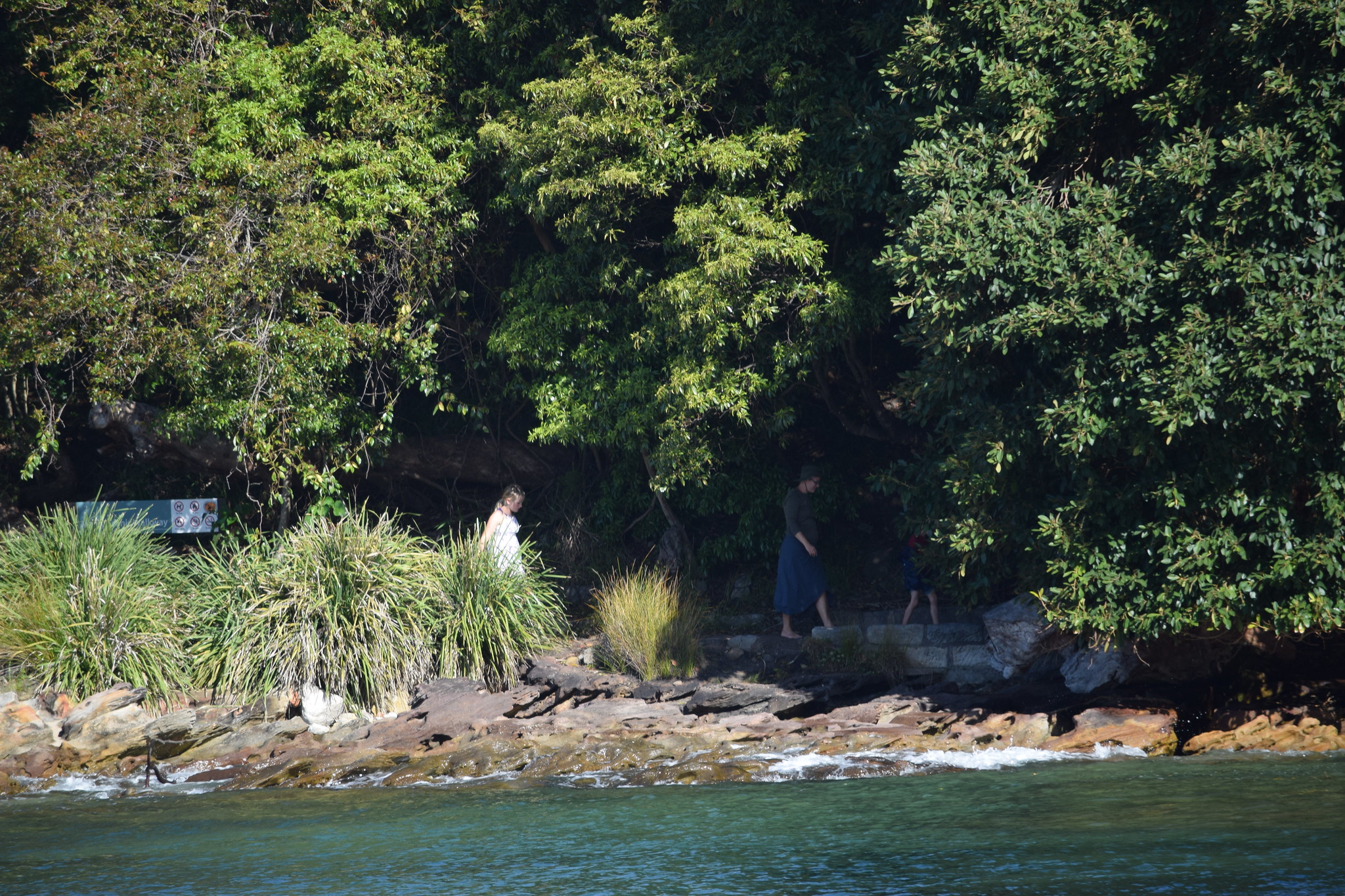 We took off our shoes and waded, and then the girls and I decided to try walking along the rocks, most of them flat and covered with an inch or less of water, to the place where the path seemed to pick up a hundred yards down.

It took us at least 15 minutes to pick our way along those rocks, giggling when the surf splashed us, grabbing branches for balance. But when we arrived, we saw a sign saying that we were entering Sydney Harbour National Park and sighed. We’d basically made it to the beginning of the Manly to Spit Walk, and now we needed to get home because we’d booked an evening activity back in Sydney.
//embedr.flickr.com/assets/client-code.js

We returned to the beach, where Erik and Toth had been playing, dried off our feet, and trekked back to the bus stop we’d seen on the way, which my about-to-die phone told me would have a bus back to the ferry building. It only ran during commute hours, which is too bad, because it sure would have been nice to take a bus to the true beginning of the hike to begin with. If you try this hike, I’d recommend taking a taxi from the Manly ferry terminal to skip past the part where you’re just walking through people’s neighborhoods with no view.

On the ferry back to Sydney, we were tired, but we sat next to a nice Australian couple who were on a Sydney getaway from their home a couple hours away. They, like a lot of Australians we’d met, were curious to hear what we’d seen and what we thought of it, and the 20-minute ride passed quickly. We brought the kids back to Mom, who had had a nice visit and who was looking forward to taking the kids to Luna Park for some rides while Erik and I went out. I quickly changed my clothes and threw on some lipstick and earrings, and we hurried back across the bridge to the Rocks, where we’d arranged to meet up with a guide and group from Sydney Pub Tours. That experience turned out to be so epic, I’m going to dedicate a full post to it, next time.