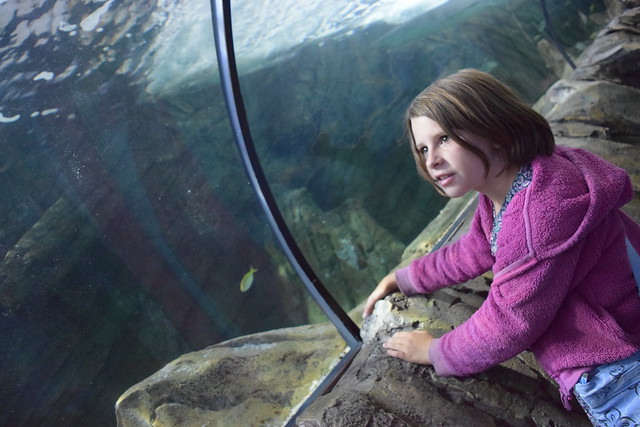 So here we are on Tuesday. Despite the huge time change, we were experiencing very little jet lag other than the tendency to fall asleep early at night and be up and up every day at 6, which is really not so bad because it meant that every morning we were dressed and fed and out the door before 9 a.m.

On this day, we took the ferry from the Milson’s Point quay, next to the entrance to Luna Park, to Circular Quay, and walked the opposite direction from the day before, to the historic Sydney neighborhood known as The Rocks.

As you might guess from its name, The Rocks is built on sandstone, and it has stairways and tunnels carved in. On the lower parts of the tunnels, you can see marks from the pickaxes of the convicts who dug them out by hand. We wanted to go to the Sydney Visitor Centre there, but, as was becoming a pattern for us, we arrived before its doors opened for the day, so we walked around and bought a delicious latte.

Not only does Sydney have great coffee, but I really like their system of ordering. They will have a sign with only a couple prices on it, like, small $4 large $4.50. If you ask for a coffee, they say “What kind?” If you say, “Just regular,” they don’t know what you’re talking about. Most of the places only serve espresso drinks, no drip coffee, and you can have it any way you want for the same price. A flat white, a cappuccino or a latte, same price. I liked that. While waiting we came upon this neat layout of old home foundations. The kids had fun playing on some large furniture that had been installed there. 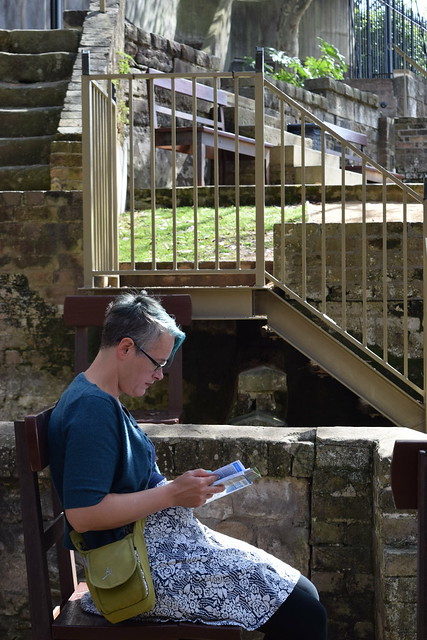 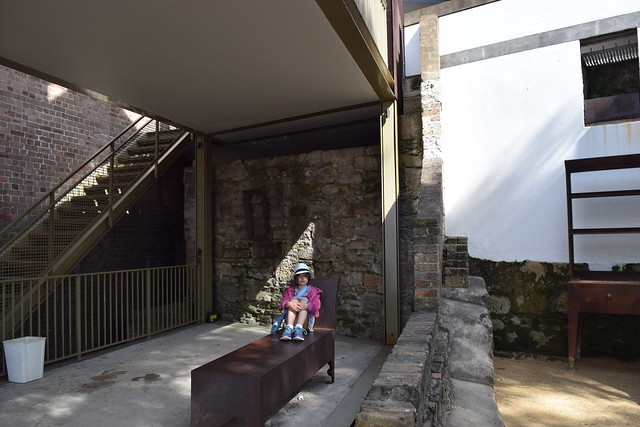 Erik and I later learned that the foundations were left exposed to illustrate the cramped conditions under which the early inhabitants of The Rocks lived. Families had an average of 8 kids, and they lived in four rooms: A kitchen with barely room for table and chairs, a living room, and two bedrooms upstairs. At first the neighborhood housed the convicts who were the colony’s first settlers. The convicts were encouraged to marry, and once they’d served their sentences, settle there. Actually, we learned later, many convicts were there for extremely minor crimes, mainly because the Crown wanted settlers, not because they were dangerous people who needed to be removed from society. In fact, if you were arrested and you were a useful tradesperson, you were more likely to be shipped off to Australia where your skills were needed .

After this we walked down George Street, the main drag of Sydney’s Central Business District, but it wasn’t that great because the middle of the street is dug up for a huge construction project — a trolley line. Peckish for “second breakfast,” we bought a Lebanese snack called a man’oushe from a stand and loved it. It’s basically a flatbread pizza.

We checked out the Queen Victoria Building, a gorgeous restored building that was once threatened with demolition and now houses an upscale shopping center. We had wanted to see the building’s famous clocks chime the hour, but we forgot that we would have to arrive on the hour to see this. We got there at about 10 minutes after 11 and felt very silly, since we had a lunch date and wouldn’t be able to wait around.

I had an appointment then so I had to leave the rest of the group. I was scheduled to visit my cousin’s office at the National Parks and Wildlife Service to interview a spokesperson about bushwalks in the Sydney area for a potential article. I rushed off to their office tower while the others checked out the Dr. Seuss store in the QVB and met a nice salesperson from Minnesota.  My interview was great. Not only was the spokesman able to give me some great bushwalk tips and help me learn about how you can book lodging in national parks on their web site (now we need to go back), but I also met with someone from the team that produces a whale watching app so you can find out if you’re hiking in a spot where someone saw a whale yesterday. The app my cousin’s team works on seems super fun too. I don’t know about you but I want to work there.

After the interview, my dashing youngest cousin and I went down the elevator and reuinited with the family. We walked over to World Square Shopping Centre and he asked where we wanted to eat. Of course we had no idea and we would have settled for burgers, but then we happened upon a dim sum place called Din Tai Fung which he said is quite good. Well, the kids love dumplings, so we were all in. Little did I know that we were about to experience what many have dubbed “The World’s Greatest Dumplings” from a famous Taipei-based chain. This was actually our first real restaurant meal in Sydney, and it was spectacularly delicious.  (I since learned there is a Din Tai Fung in the Bay Area. Wait for me, dumplings! I am coming!) 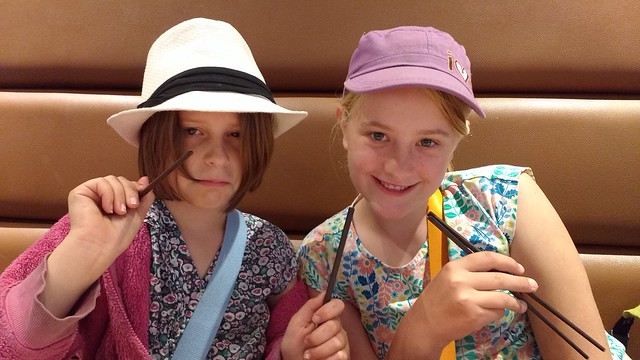 All the dumplings were juicy and delicately flavored. Of course this steamer of rainbow-colored ones was a hit with the kids.

We said goodbye to my cousin and walked 15 minutes to the SEALIFE Sydney Aquarium in Darling Harbour, one of the many skinny little bays that make up Sydney’s waterfront. On the way we passed through the Darling Quarter Kids Playground, a very tempting, clearly new play area with a zipline, a huge climbing net, and just everything. We had to drag our poor children past it because of course the aquarium has set hours and since we were paying A$30 to A$40 per person to get in, we didn’t want to go in at the very end of the day. But we promised the kids we’d return to play later.

As with every Australia attraction, Erik and I were focused on seeing things that you might only see in Australia, while the kids were much less discriminating. They love aquariums, period. For us adults, the highlight was meeting a dugong, an animal I don’t think I’ve ever seen before since they don’t have any at the Monterey Bay Aquarium or the Shedd Aquarium. Well, it turns out dugongs are adorable!

Like manatees, which we got to see in the wild in Florida, dugongs are basically water cows that eat vegetables all day. At the Sydney Aquarium, they feed them lettuce.

The aquarium also had one of those tunnels you walk through where you can see animals all around you. Pretty nice. 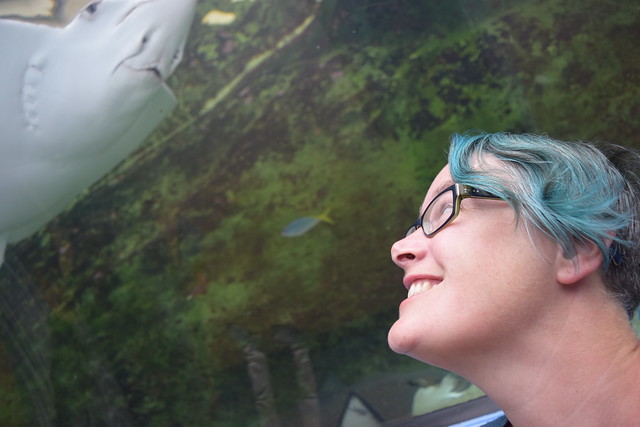 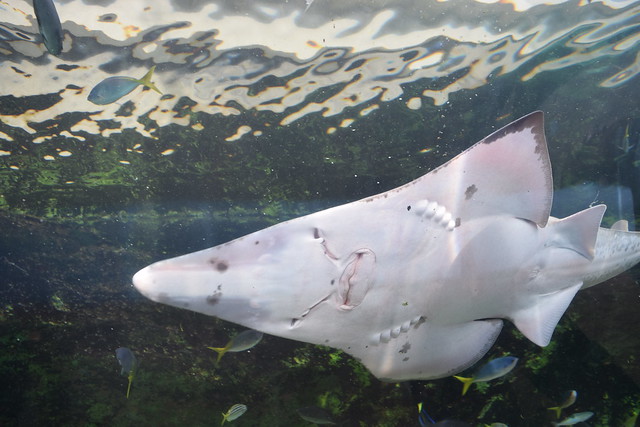 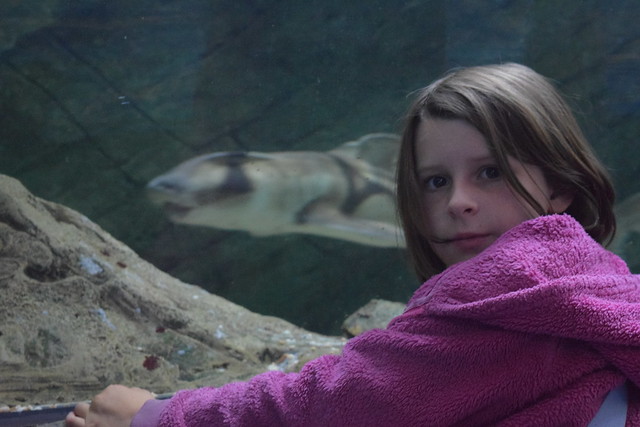 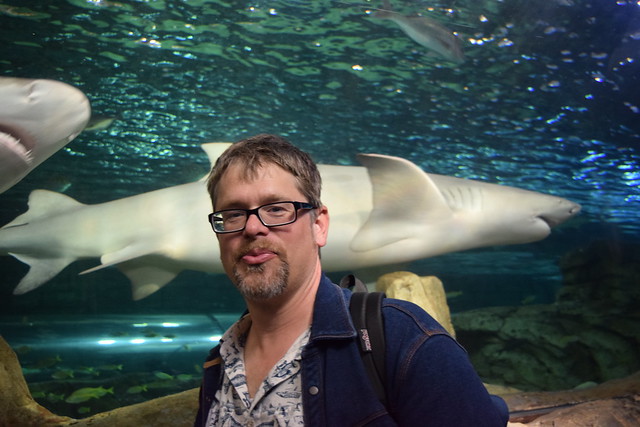 I can’t say it was the best designed aquarium I have ever been to, however. Moving from one area to another involved leaving the exhibits and going up and down stairways where there was nothing to see. And the whole place was designed like a maze where you had to go through one exhibit after another, instead of standing in a central lobby and choosing. It was kind of like Ikea — start at the beginning and go through everything. Worst of all, there didn’t seem to be any bathrooms in the middle of the exhibit — although if you found a staff member, they could lead you to one.

After seeing all the animals, we went to a kids area where the kids were able to create their own sea creatures and scan them in to see them swimming on a screen. 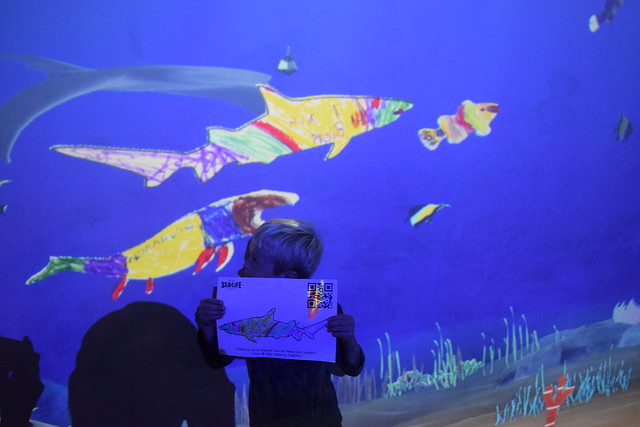 The kids loved it and ended up hacking the system to create all kinds of weird hybrid creatures once they got tired of coloring the standard ones. Once we left the aquarium, we were a little confused about what would be the best way to get home. Here we were at a harbour with plenty of quays for private ferry companies, but no apparent public ferry. Later, we learned that some of these private companies ran lines with similar prices to the public ones, and we might have been able to grab one back. As it was, we just walked a little farther to the public quay and took a boat home to get some rest. 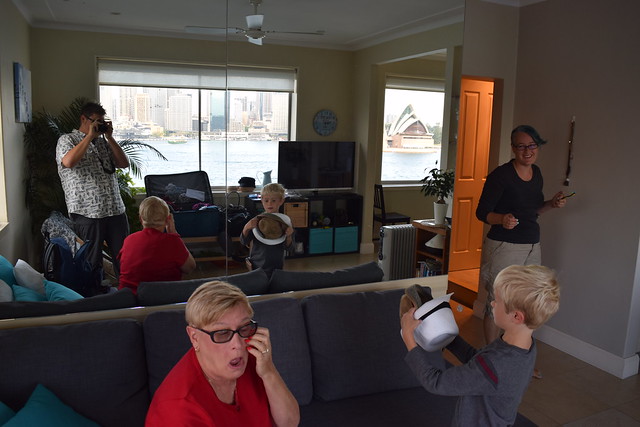 But our day wasn’t done yet! We were scheduled to meet our cousins and their girlfriends for dinner when they got done with work. We were planning to take an Uber to the appointed restaurant, since it was not near a train or ferry. But once I got Uber downloaded onto my phone, I was dismayed to see that it wanted a working cell phone number to send a verification before it would let me summon a car. It would not accept my Google Voice number. We ended up asking our cousin to call us a regular taxi at the last minute, and arrived at the restaurant late, which was a bummer because since we were supposed to meet at 7, the kids were already tired.

In fact, Toth stretched out across my and Erik’s laps as soon as we got there and went to sleep before we ordered.

It was kind of nice to have a kid sleeping on my lap, something I haven’t experienced in a restaurant in many years. The restaurant, Italian Street Kitchen, was trendy and chic, in the Neutral Bay neighborhood, in the Northern Suburbs like our apartment. It was nice to see a neighborhood away from the touristy areas, where normal Sydneysiders with good taste spent their evenings. I enjoyed a glass of wine and some pizza and a great chat with my cousins, both the couple who were about to be married and the cousin we’d just met for lunch and his girlfriend, who gave us more great tips about bushwalks. We already knew our older cousin’s soon-to-be bride well, since she’d lived in California for six months, but this trip was our first time meeting our youngest cousin’s girlfriend, and we just loved her. Hope to meet her again someday!

At the end of the night my cousin drove some of us home, and the rest of us took a taxi before we all collapsed into bed exhausted.