I opened my eyes on the first morning waking up in Sydney to the sound of Erik’s regular 6 a.m. alarm, helpfully changed to 6 a.m. Sydney time by his phone. Through the screenlike window shades, I could see silhouettes of the Opera House and the Harbour Bridge. Soon the kids and my mom were up as well — everyone had slept 10 hours or more — and I fed them and packed a lunch for all of us.

I opened one the shades to discover a city transforming from gray dawn to a brilliant blue day. This was to be one of those golden, sunny days that made the long journey feel worthwhile. We were out on the street before 9 a.m., feeling full of energy and ready for adventure. 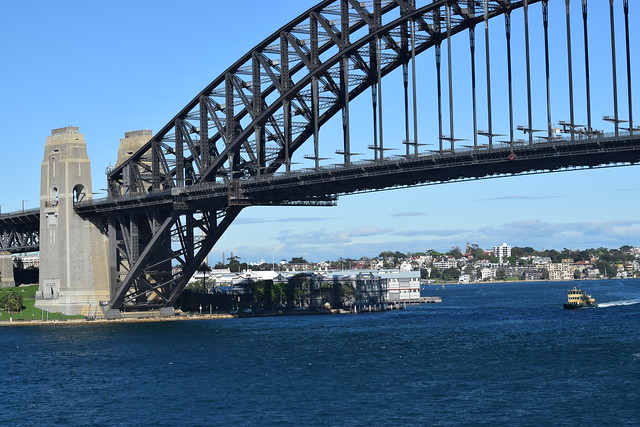 The weather was remarkably similar to San Francisco — cool in the morning and then getting quite warm in the midday sun. We decided to walk across the Harbour Bridge to the city. The steps to access the bridge were just a short walk along the Harbour from our apartment. Just like the Golden Gate, it got really windy up there, mostly right when you get on the bridge and when you exit it. It’s a lot shorter than the Golden Gate — just 3,370 feet compared to the GG’s 8,981 feet. 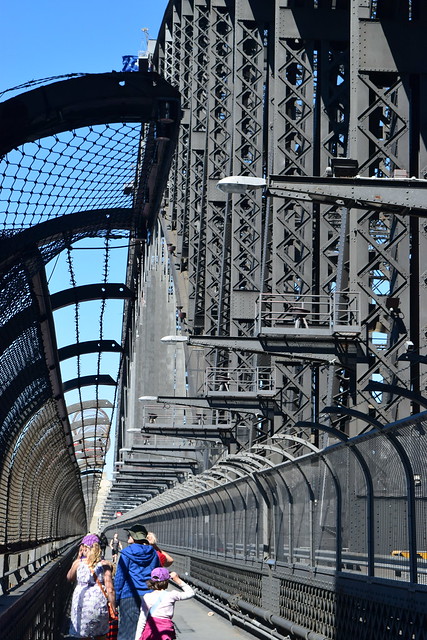 and to look back at our building, which stood out because it was one brown building between two white ones.

No one wanted to go on the BridgeClimb with me, a famous tourist thing where you pay hundreds of dollars to get roped in and hike the arch of the bridge, 400 feet above the water. But we did see that you can pay to go up one tower of the bridge on an elevator to enjoy the view. We wondered why it wasn’t open, until we realized that we had left the house so early that it just wasn’t open for the day yet.

On the other side of the bridge, we followed signs for the Cahill Walk, which took us to the Royal Botanic Garden. We were noticing that Sydney was full of “walks” with names, and arrows directing you which way to walk. Sometimes the signs even told you how long it would take you to walk to the next attraction or ferry quay. We loved the implication that people were expected to walk most places.

We bypassed the historic neighborhood, The Rocks, to our right, as we exited the bridge to the left. Our walk looked down on Circular Quay, where we could see Aborigne performers setting up their displays and giving their didgeridoos a little warm up. We passed by the Opera House too, saving a close inspection for later.

Looking around at the city buildings, the blue Harbour and the greenery, the kids were ready to make their assessment of Sydney: “It’s like a combination of San Francisco and London.” I thought that was apt.

We wandered into the Botanic Garden, which was celebrating its 200th birthday after starting out as a garden around Government House, the original residence of the governors appointed by England to rule Australia. We looked at a few trees and plants without really understanding what we were seeing. I tried to ask a volunteer at an information stand about the Aboriginal Heritage Walks, which I’d read were really interesting, but he was sort of charmingly ignorant about them. We bought some delicious coffee and sat down on a bench next to a pond and ate the lunch we had packed, even though it was only 10 a.m. We called it “second breakfast.”

In the pond were huge eels and ducks. The kids learned from the signs that the eels sometimes eat baby ducklings, but that the adult ducks eat the eel eggs, so all’s fair. We also got a pamphlet showing different kinds of local birds. One that the kids had already noticed was an aggressive bird that they called the Sydney Garbage Picker, because we kept seeing them eat out of the trash.

After eating we returned to the Harbourside, and the kids searched the water for box jellies. 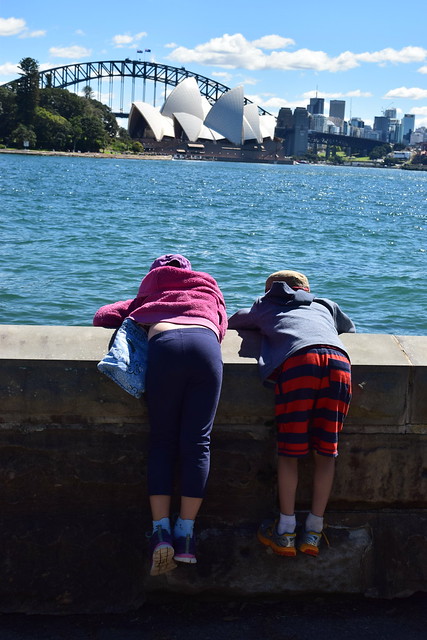 My cousin had advised us to walk to something called Mrs. Macquarie’s Chair (Macquarie was that governor whose garden this once had been), so we followed signs that way. It was fun to see the Opera House from the other side, now with both Sydney icons in the same view. Far from their dull appearance from yesterday, the Opera House’s white tiles glistened in the sun as they were designed to. 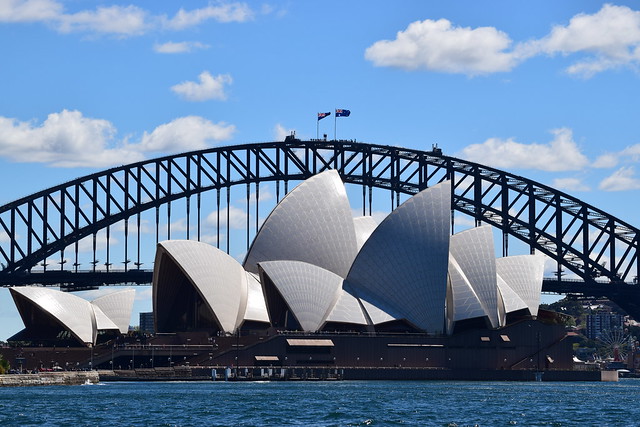 If we looked carefully, we could see the bridge climbers making their way up the top of the arch. 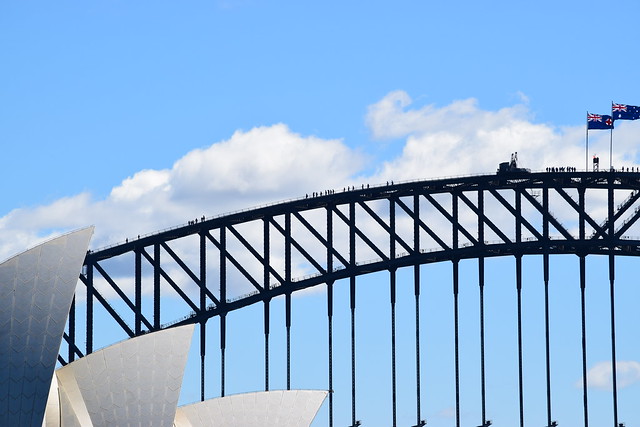 Eventually the kids did spot a box jelly. 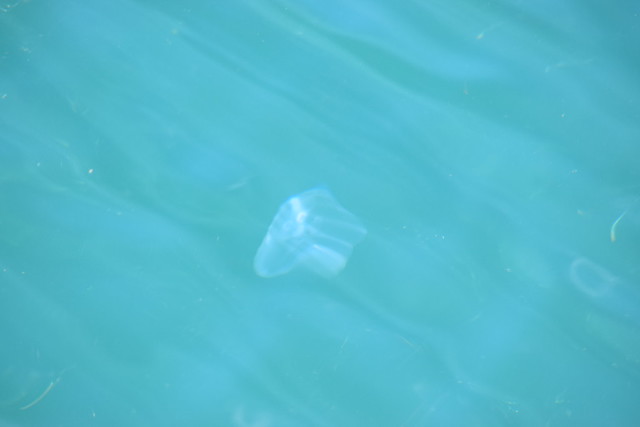 We came to a spot where groups of tourists were taking turns having their photos taken. We didn’t really know what the fuss was, but we thought we’d better pose for a picture there too: 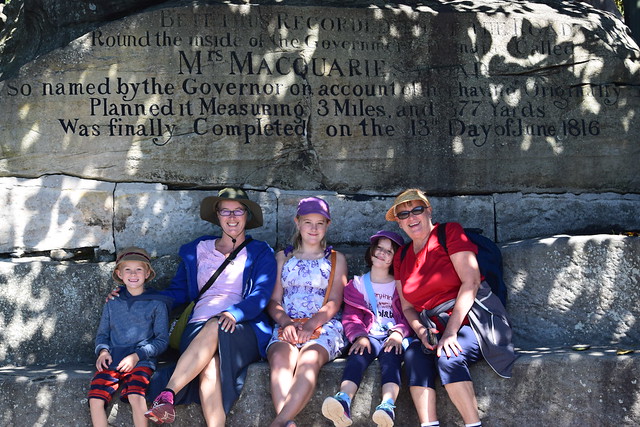 The rock ledge we were posing on, we realized, was Mrs. Macquarie’s Chair. The wife of one of the early governors, Mrs. M had asked for it to be carved into the sandstone so that she could gaze out at the Harbour. Well, it was nice, but the kids found plenty of other “chairs” to sit on that they liked just as well, without the wait: 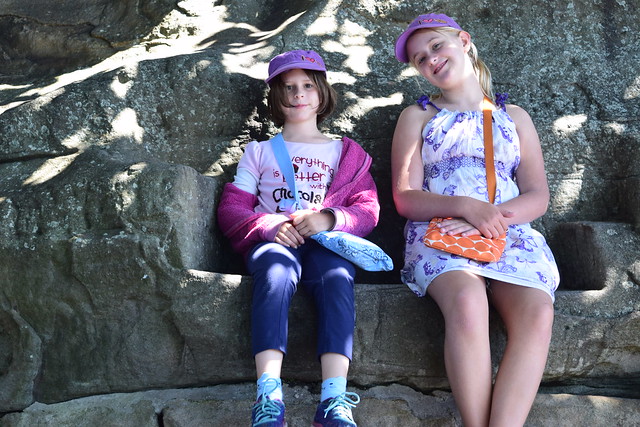 We kept walking, and saw a naval ship, which must have been docked at Fleet Base East, an active Royal Australian Navy base in the Harbour. 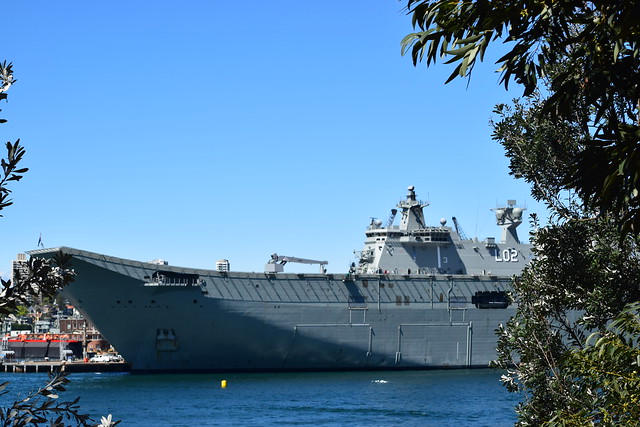 At this point, we emerged from The Domain — the whole area around the governor’s residence. We saw Finger Wharf, which is a long (as you might imagine) wharf that looked full of kind of fancy restaurants and such. Around there we also saw one of Australia’s many clubs, with its private outdoor swimming pool and members-only cafe. We were now in a neighborhood — or as they call it there, a “suburb” — called Woolloomooloo, apparently a gentrified, hip neighborhood. We were in a We were getting tired — we had walked more than three miles at this point — so we took my cousin’s advice and stopped at a pub called The Tilbury Hotel, where Erik and I tried some Australian beers and the kids got a weird dessert that they did not like, but the nice bartender, perhaps feeling sorry for them, gave them an extra chocolate muffin for free. I had a Cooper’s Pale Ale, which was about the most refreshing thing I’ve ever tasted.

It was a bit early to call it a day, and we realized that we were now near The Australian Museum, something I wanted the kids to see early in the trip to give them context for everything else they saw. So, refreshed, we walked there. It’s a bit of an old-fashioned museum, medium-sized, and not very expensive. First we checked out taxidermied animals. We had decided before leaving America that one of our goals for the trip was to see an endangered quokka, and while we really wanted to see one alive, this stuffed one got us excited. 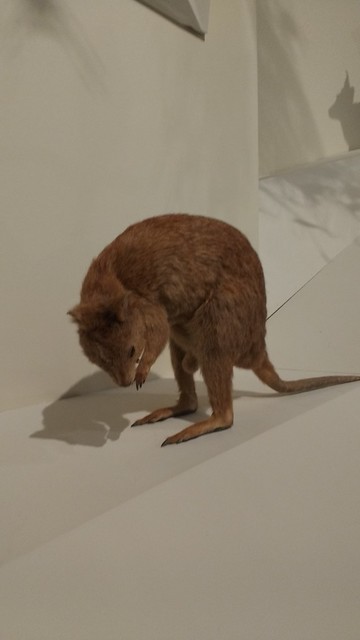 //embedr.flickr.com/assets/client-code.js
We also learned that our friends the “garbage picker” was known as the Australian white ibis. We also learned about microbats, Australian bats the size of moths weighing 5 grams or less that we might see fluttering around lamps at night — an idea that both thrilled and horrified us. I dragged the kids past things they’d rather gawk at — like taxidermy of California brown bears and grizzlies — to the section about Aboriginals, and I forced them to learn a few things about the Gadigal people who had once inhabited Sydney year-round, enjoying the bounty of the harbor and surrounding greenery. Then Grammy took the littles to the children’s play area, where they learned to write some Aboriginal symbols and dressed up in costumes, and Nutmeg and I checked out the gemstones exhibit. We stayed for hours and eventually had to drag the kids out so that we could go home and have dinner.

Outside the museum we crossed through Hyde Park on the way to the subway station, and happened upon the Anzac War Memorial, a monument to Australians lost in World War I. Then we rode the train two stops to Circular Quay. We could have taken the train all the way back to Milson’s Point, our side of the Harbour, but we hadn’t had a ferry ride yet, and besides, Pebbles was committed to getting ice cream every day of the trip, so we had to buy some at Circular Quay.

Then, on board the ferry, it was time for one of many failed attempts to get good selfies with Sydney’s icons. 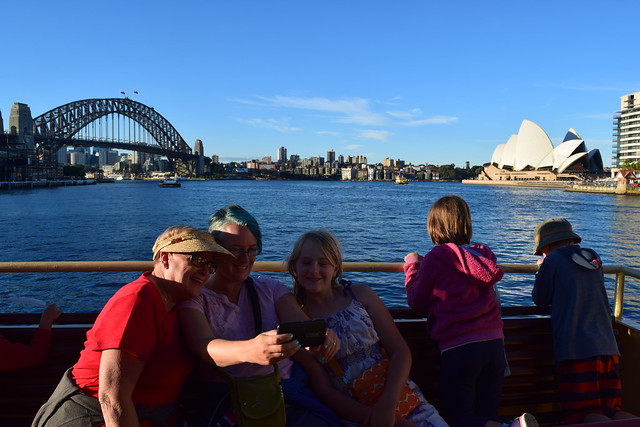 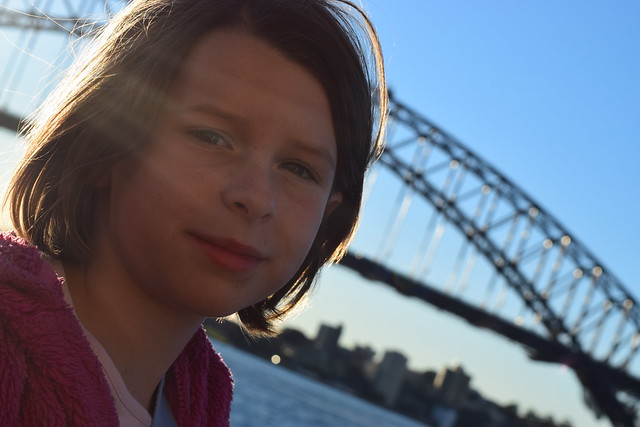 Back home, we had dinner and sat back to watch Sydney change colors as the sun went down. We still couldn’t believe we had managed to get such a spectacular rental — and thanks to a favorable exchange rate and a discount for staying the whole week, it was only $250 a night for all six of us. 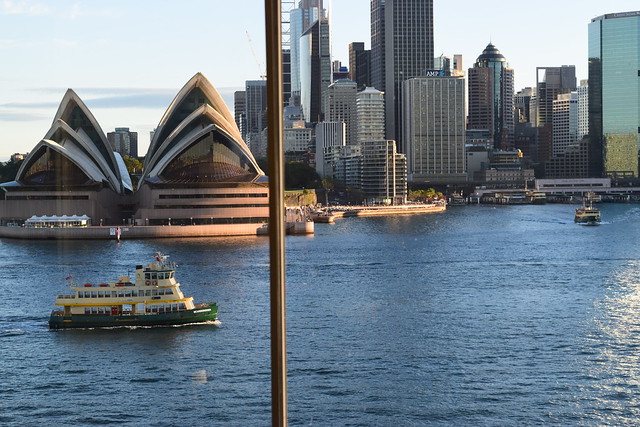 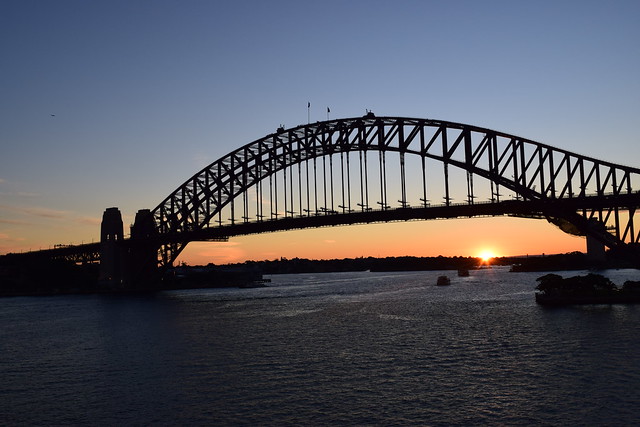 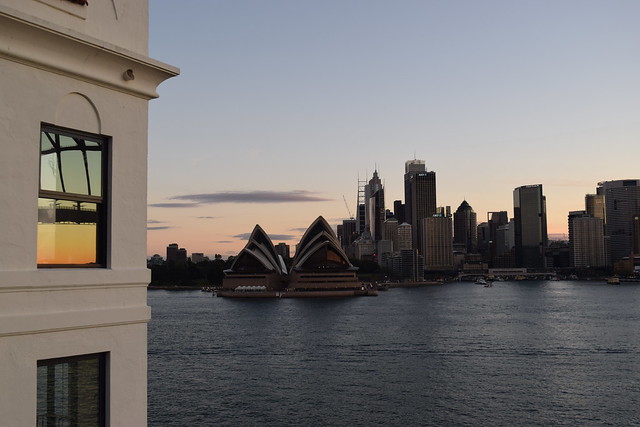 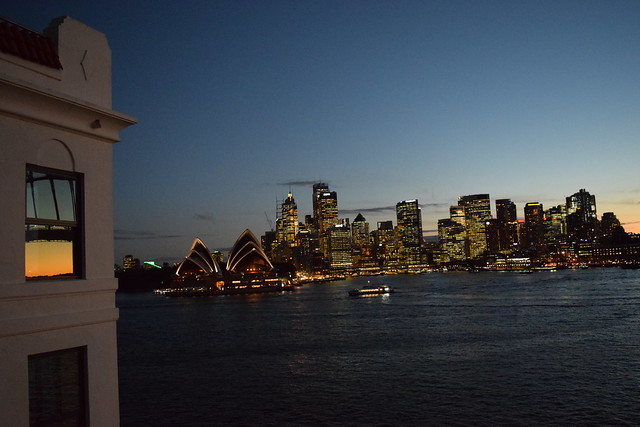 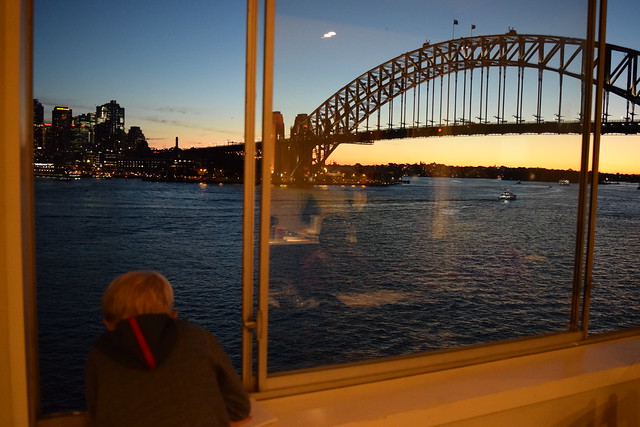