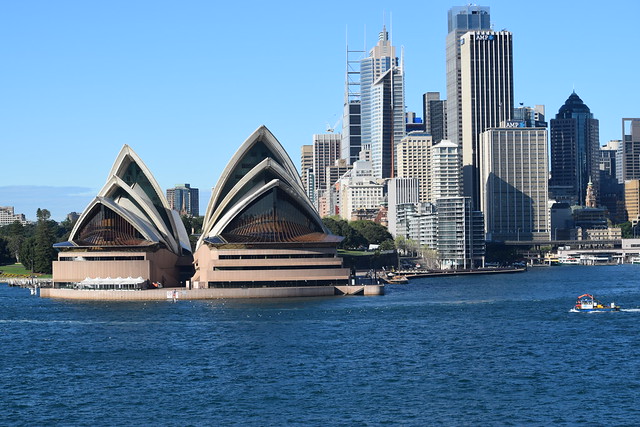 This begins my account of our most epic family trip ever, the two-week trip to Australia undertaken by my husband, myself, our three kids, and my mom. Our story will be told in many parts. This is the first.

Leaving on our Australia vacation was like no other trip because we left at the end of the day. I tried to have as much as possible prepared on the days following, but of course I had a long to-do list left on the day of, and while the kids were at school, I ran around, checking, verifying, sending notes and texts, and getting my nails done.

After school Toth had soccer practice and Pebbles had a school barbecue, and at about 7 p.m. we got on BART to head to SFO for our 11:30 p.m. flight.

Security was a breeze, so we had plenty of time for the adults to take turns grabbing drinks at the airport bar (I heroically went to the bar first with my mom, then with Erik, so that no one would have to drink alone). At the bar we chatted with some Australians on our flight, one of whom had just been to Burning Man.

The flight took off around midnight, just a little late, and the girls fell asleep almost immediately, not waking up when food was served around 2 a.m. our time. No one looked out the window because there was nothing but blackness out there. The food was not too bad. We passed the flight alternately sleeping and watching movies on our video screens, and taking walks to the snack bar area by the rear bathrooms, which is lit up all night with blue light. I liked to have little dance parties back there. We thought such a long flight in coach would be miserable, but having exactly six people so we didn’t have to sit next to strangers, and being able to cuddle up with the kids, made it bearable. After many hours we saw an amazing rainbowlike horizon outside the plane. Dawn.

Before we knew it, we were treated to an aerial tour of Sydney, including the Opera House and the Harbour Bridge. We were served a crappy breakfast and landed. Our flight had been about 13 and a half hours, a little shorter than we expected.

At Sydney Airport, everything went smoothly — immigration, bag collection, buying Opal cards to ride the train, getting our Tep Wireless connected so we could use Google Maps to take the train. The kids, though tired, held their own.

We found the train easily and were off. The train was very clean and nice. We had to change trains once, and then we were passing right over the Harbour Bridge, which was closed because a footrace was going across it. As tired as we were, we were all eyes. The day, however, was gray and threatened rain, so at first glimpse, the Opera House looked not sparkling white like you’d expect but kind of tired and shabby. Once we arrived at our stop, Milson’s Point, we had to walk about 15 minutes, which would have been fine except that we accidentally chose the footpath along the Harbour, which turned out to be full of steps carry our bags up. Then, we hunted around for our apartment for a few minutes, and had to haul all our bags up two flights of stairs. But when we got in, this view rewarded us. I hadn’t told my mom or the kids we would have this: 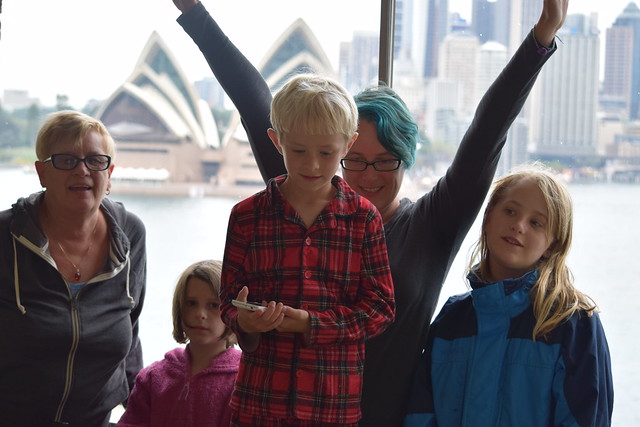 We felt disoriented and of course tired. Erik and I immediately made coffee and poured in some whiskey, then said, “Should we go get some lunch?” Then we realized it was only 9:30 a.m. After settling in a bit, we headed back to the shopping area around Milson’s Point to look for a restaurant to eat whatever meal it was that we were hungry for. Walking around Sydney felt at once different and familiar. After all, everyone was speaking English, and prices were in dollars and cents, although everything felt very expensive unless we remembered that one Australian dollar equals about 75 US cents. The buildings and the streets just looked subtly different than what we were used to. The foods in the grocery store were a little like the ones in England, and a little different. Everyone was friendly to us.

Our goal was to stay awake until 7 or 8 p.m., so as not to waste too much of our trip feeling jet lagged. We took a long walk to a grocery store — Aldi of all places — and took the subway one stop back. Then our cousins whose wedding we were going to visited us in between wedding prep errands, and the joy of seeing them again after four years perked us up. When they walked in, they were amazed by the apartment’s view.

“This is Sydney right here!” my cousin exclaimed.

We were chatting away as if we’d never been apart. When they left, Pebbles and I went for a little walk to explore the Harbourside paths we could see from our window. We ended up wandering into vintage amusement park Luna Park, just a few minutes away, which is free to enter. It started to rain as we walked, but I bought her a Popsicle anyway. Besides this little walk, we spent a lot of the day watching ferries and other boats bustle around the Harbour. We were directly opposite Circular Quay, the main ferry terminal, which is just next to the Opera House. The apartment had windows facing both this, and to the side, so that you could see the entire Harbour Bridge as well.

I cooked some dinner and fed the girls — Toth had already fallen asleep — and one of my other Australian cousins stopped by and introduced us to his lovely girlfriend. Just like his older brother and fiancee had, my other cousin also gave us tons of tips on what to do in the Sydney area, and answered all our questions. The moment the girls had eaten, they begged to be allowed to go to bed in the room they shared. When my cousin left, we realize we’d done it! We’d stayed awake past 7! We groggily ate a little food, took some pics of our nighttime view 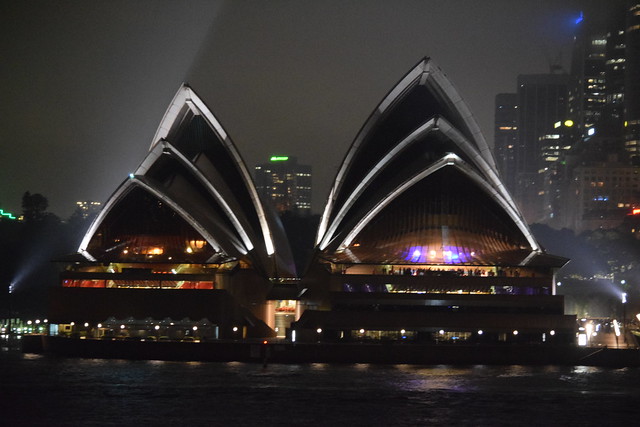 and went to sleep, Erik and I sharing a pull-out sofa in the living room, my mom sharing a bed with Toth, and the girls sharing a bed in their own room. We all woke up a few times during the night, but managed to sleep pretty well on and off until 6 a.m.